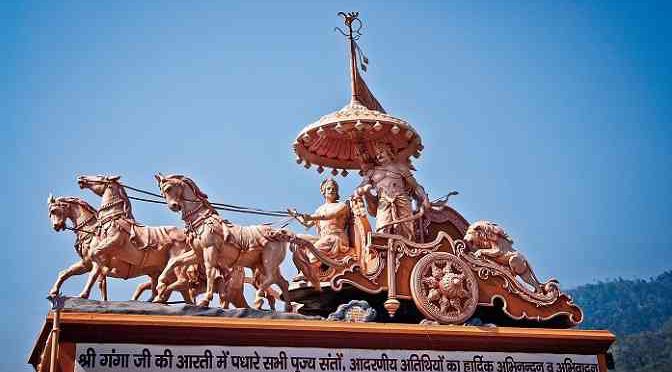 Couple of weeks back, I had posted my Book Review of “Dashavatar: Stories of Lord Vishnu” authored by Piyusha Vir. Following is the link to the post.

Piyusha Vir was gracious enough to write this brilliant, insightful and incisive post for my blog on deciphering mythology. Hope you enjoy reading it, as much as I did. Do pick up her book if you haven’t already!

It is true that the Hindu mythology, especially the two epics written, are among the greatest pieces of literature that exist in India. They have captured the imagination of a gigantic number of writers, painters, lyricists, film-makers, and of course, the audience.

It isn’t without reason that we just can’t have enough of these mythological stories. The relevance, truth, and contextual interpretations contained in them cannot be denied. The stories hold meaning even today, thousands of years later. And yet, we have no idea who wrote these stories and how they got passed on with such unfailing regularity.

While we do believe that Valmiki and Vyasa were the original creators, the fact is no such archaeological proof exists that it is they who deserve the full credit. If the events actually did occur, it would make them a part of history and not mythology. Besides, facts don’t have different versions. The many different takes and versions that exist for our epics are enough to make one’s head reel. There is one section of society that believes that the events did actually occur and find corresponding evidence to corroborate those claims. I personally feel these are nothing but the result of someone’s outstanding creativity and imagination.

But what is undeniable is that there may have been historical and geographical incidents that one could use to form the outline of such stories. And of course, unlike contemporary fiction, these stories are no one’s copyright, so overtime they have undergone several distortions and interpretations.

This was one major challenge that I faced while writing Dashavatar. Interestingly, one of the most common questions asked of me during my interactions with readers at the World Book Fair was, ‘Are these stories real?’ or more specifically, ‘Are these stories the authentic version of what happened?’

How many of us really know what happened? It’s a fact that none of us were alive then. What basis do we have to believe the stories, the scriptures and the other religious texts that have been passed down the generations? The truth is any story is written on the basis of what the writer knows. It is inevitable that the stories contained in Hindu mythology were based on what existed that many years ago and was enough to fuel the imagination of our rishis. But from being transferred orally to being written down from memory, to being translated and interpreted in more commonly consumed languages, a lot had got diluted and distorted.

It’s interesting to note how there are many variations within the scriptures themselves. While one popular version, that we all know, is that Ravana abducted Sita, there is another that says Sita was never abducted and it was only an illusion of Sita, called Maya Sita, who was taken forcibly by Ravana. Another version says that Sita was in fact Ravana’s daughter, and he only took her home.

Which is the most authentic version then? Which is the embellished story and what is the actual truth? At some point, it even ceases to be about ‘truth’, instead becoming more a question of ‘whose truth’.

As we do today, I am sure the audiences then too would have asked questions and poked holes in the narrative. It is possible then that the stories evolved over time to satisfy the curiosity of the consumers and audiences and ended up being the different versions that we know and read today.

At some point we have to stop taking the stories at literal value, and understand the deeper contextual meanings and interpretations that are evident despite the minute differences among the texts. For the lessons and the take-aways aren’t in the details but in the stories themselves. And while we consume the stories for entertainment and education, the stories themselves have proved timeless.

This is the most striking element about these stories – their relevance even after thousands of years from the time they were originally written. The many truths (and the different versions of it, too) contained in the stories have withstood the test of time and the wisdom that we can extract from them holds in good stead even in this day and age.

On one hand, it is important to take into consideration the various pearls of wisdom that these stories adorn our so-called historical and mythological heritage with. On the other, it is upon us to imbibe that knowledge and adapt it to our respective circumstances in today’s fast moving, technologically dependent, and ever-evolving society.

Piyusha Vir is a full-time writer, some-time blogger, and part-time English Language teacher. Her articles on various feminism related issues, have been published on various platforms like Sheroes, LBB Delhi, Readomania, Momspresso, and WomensWeb and have won her many awards, accolades and appreciation (including a Kindle and an ‘Author of the Month’ felicitation!) In 2018, she was awarded the Top 5 position in the Orange Flower Awards 2018 for the category of Writing for Social Impact. Her only credible claim as an author was with Mock, Stalk & Quarrel―a multi-author anthology of 29 satirical tales, and later an ebook of short stories, Just Another Day, published by Readomania Publishing. Dashavatar is her second attempt at calling herself an author of a solo-authored book. After writing short stories, she is dreaming of writing a full-fledged novel which, if at all, should be out sometime within the next hundred years. When not gushing over the latest book she is reading or whining about the pile of unread books, she is found gazing out her bedroom window, day-dreaming about becoming the next JK Rowling.