“Sometimes, I find myself in the pages of a book” – This is a line from a poem I had penned on finding my identity a few weeks back. The latest creation of Writer’s Collective, “Aashi” is one of those books where I found flakes of myself scattered across its length and breadth. Aashi’s story is not my story. Yet, the terrains are familiar; the world seems my own; the core is one. Her passion, her spirit and her outlook towards life – I found myself in the essence of Aashi. This is Author Maitabi Banerjee’s debut novel who makes a glorious entry into the literary space with a story that converses with you like a long-lost friend.  You listen, you laugh, you sob, you scream, you believe and you embrace it with all your heart. 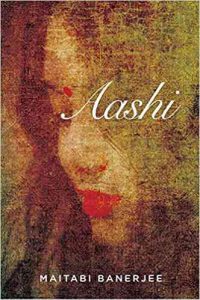 Ashima Lahiri aka Aashi is a zealous and fearless journalist for whom her job is not just a ‘have-to-do’ job. It’s something that adds meaning to her life and enriches her soul. The story begins in Kolkata with her busting a human trafficking racket, catapulting her to a superior spot in her career. In parallel, her marriage preparations are on in full swing with a man named Kaushik who seems to have all the boxes ticked as a groom-to-be. But all along, there is one person – Abir – who never leaves her thoughts, hinting at a past that is lurking in the shadows of her present. She swims the tide and ties the nuptial knot with Kaushik, soon after which she lands up in the US with him. From here on, her life undergoes a gradual transformation and she realises that this is not what she had signed up for in the first place. How she takes charge and reclaims herself forms the crux of the latter part of the story. Does she find the happiness that seems to be playing hide-and-seek with her? Does she chart her path on her own terms? And most importantly, does Abir come back into her life? You got to read the novel to find your answers!

The premise of “Aashi” is rooted in reality because of which you become a part of this world the moment you start reading it. Having been involved in the rehabilitation of human trafficking survivors, I almost felt as if I was with Aashi at every step of the way as she carried on with her investigation. The hushed conversations, the life risks, the murkiness of the trade and the high-profile names at the top of the chain – I have known all of this from close quarters. Maitabi’s unassuming and mellifluous style of writing lends authenticity to the proceedings and her evocative descriptions bring to life the scenes as vivid images in front of the reader’s eyes.

What I found interesting is that Maitabi has narrated the story with an empathetic yet objective gaze. She has neither glorified her protagonist nor has judged her for her flawed decisions. She has depicted her with utmost conviction, making her one of the most nuanced and realistic female characters I have come across in Indian contemporary fiction. You will not always agree with Aashi. At certain points, you may even want to cajole or chide her. But you will always feel for her and root for her. Maitabi has completely steered clear of the trope of generating sympathy by creating a holier-than-thou character. Instead, she gives us someone who we know exists in the real world. We all make mistakes and pay the price for them. We all don’t always get what we desire. But we still hope, love and chase the life of our dreams. That is Aashi’s journey too. Just like ours.

Abir is not just a well-etched character but is the ally every woman seeks in men. He is not the rescuer. He does not take the stage. Instead, he just stands by Aashi and encourages her to be what she is. Maitabi has meticulously added a certain depth to his bond with Aashi which is a beautiful blend of mush and pragmatism – a hallmark of a writer who knows her craft!

Another character that stands out in the novel is Kolkata. Kolkata goes beyond just being the setting in this story. It is there even when it is not. It is a metaphor at times. Then at some point it is also a foreshadow. It is an integral part of the weave and impacts the threads in multifarious ways. Kolkata travels along with Aashi to the US and is a part of her internal conflicts. It is not just about Abir or her profession. Kolkata is where she feels a sense of belongingness. The supporting characters too have been given a crucial role to play in the tale with tones and shades of their own. Carved with as much consideration as the leads, they manage to find a place in your memory beyond the pages of the book.

It is difficult to box “Aashi” in a genre. To some, this may be a love story. For me, this is the story of every woman who is caught between conformity and defiance, struggling to strike a balance between societal norms and her own aspirations. For this very reason, the part of the story set in the US resonated the most with me. The character arc from towing the line to being lost and befuddled to finally speaking and doing her mind is handled by the author with aplomb and precision. The story may speak to each reader differently which is interesting because it leaves room for varied interpretations and takeaways. My only grouse with the book is the rough jerk at the end of a gentle ride. The climax catches you unaware leaving you uneasy and desperate for a comforting conclusion. But the more I think about the ending, the more I am convinced that this is a well-thought out decision. I guess the author has done this with the right intention. Because in reality, no story ever ends. In the real world, we do not always get closures. So, this actually goes with the authentic tenor of “Aashi”.

But dil hai ki maanta nahi,  so I will wait for that sequel Maitabi. “With hope. With faith.” Just like Aashi.

Note: You can get your copy of ‘Aashi’ from here.