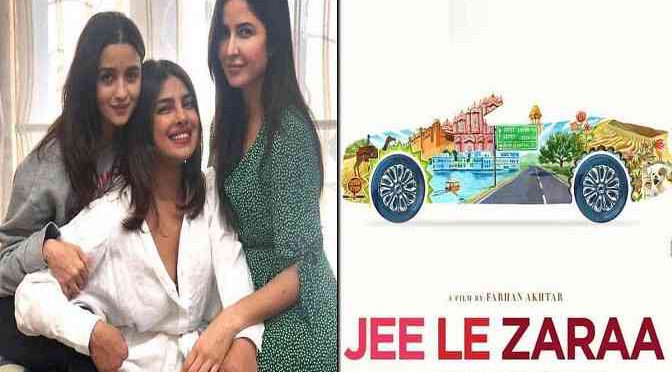 An all women group taking to the roads in a top together. Will this be the “women travelling together” film we’ve been waiting for, or will it follow stereotypes about women?

‘An all women trip’ – just the sound of it is exhilarating, isn’t it? If not gone on one, most of us have at least dreamt of chilling out with our female pals at gorgeous locales to make memories for life.

So, when a mainstream Bollywood movie was announced on this very theme, my reaction was no less than a loud scream. “Finally! Finally!” I kept pumping my fists when I read about it on social media.

For the uninitiated, yesterday, Excel Movies announced their next venture ‘Jee Le Zaraa’ through a creatively made announcement video which has since then, expectedly, created a strong buzz and clocked millions of views already.

The movie stars Katrina Kaif, Priyanka Chopra and Alia Bhatt in the lead roles and is about the girls heading out on a road trip. This is Farhan Akhtar’s comeback to direction after a hiatus, and the talented duo of Zoya Akhtar and Reema Kagti join him as writers.

Having watched and enjoyed the earlier movies from the same team like Dil Chahta Hai and Zindagi Na Milegi Dobara, I am sure this one too will be exploring the complexity of relationships and nuances in an equation of friendship, with travel as its premise.

Bollywood has been having a difficult time as an industry for the past year or so due to various reasons. I believe some concerns raised by the audience are valid, and the industry does need to address them and bring a shift in their systemic processes and content. We have seen before how some really strong concepts with great potential have been ruined by the makers because of trying to balance between doing justice to the theme and catering to the perceived taste of the masses, ending up doing neither.

Hence, I do have my apprehensions about ‘Zee Le Zaraa’ and sincerely hope that the dynamics of women bonding are dealt with honesty and relatability, and the attempt does not turn out to be half-baked or performative.

However, all that is for later, as the movie is going on floors only next year. For now, am just really happy and relieved that finally, we have a movie that I can watch with my women friends and see ourselves in. This is a refreshing change from the stereotypical ‘woman being a woman’s enemy’ narrative. We do know the impact of such movies on the society, hence it is a much needed step by one of the most influential medium of messaging in our country. I am definitely waiting for this one!