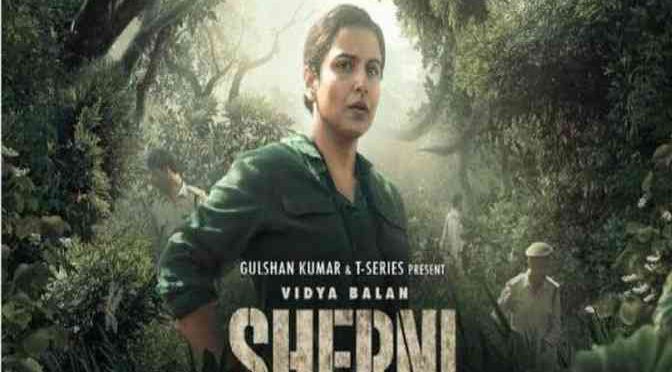 The metaphor in Sherni is evident, yet understated. The parallels are seamlessly woven into the narrative and I found myself rooting for both the tigresses. While the stupendous performances from the competent star cast elevate the impact of the proceedings, I believe that the ‘writing’ is what makes it an absorbing environmental thriller.

The eternal conflict of man versus wild is constructed with nuances and layers, without glossing over the theme with a singular lens. How a simple matter so to say has varied complexities when you delve within, unfolds in each frame with genuinity and coherence.

The central theme bifurcates into some more issues relevant to the society at large, keeping the core intact. Even though the pace is gradual, there is a sense of urgency that keeps you hooked till the end.

If you read between the gaps, the pauses and the moments here and there, there is a lot more being conveyed than what you see. Watching this movie with my daughter made it an all the more immersive experience. The questions that children ask come from a place of honesty, logic and fairness. And so the movie made me ponder.

Who is really the predator? Who is the prey? Who is the owner? Who is the trespasser? Is a balance truly possible? Will power always win over honesty and sincerity? Is there a place for ‘Sherni’ in the forest? Can ‘shernis’ reclaim the spaces which are theirs? The movie doesn’t give you the answers, because it cannot. But it does provoke you to think.

It is possible that this movie may not be universally liked. It is sans any histrionics, melodrama or even light-hearted moments (except a few) for that matter. Yes, some hilarious scenes provide the much needed laughs, but for the most part, the tone is sombre. If you ask me, after long, a movie left me feeling immensely satisfied as a viewer. Thumbs up to ‘Sherni’!

And, how could I end this post without giving a special mention to a dialogue from the movie which I will never forget!

“When you go to spot a tiger a hundred times, chances are that you will see it once. But the tiger will see you 99 times.”

This says it all!