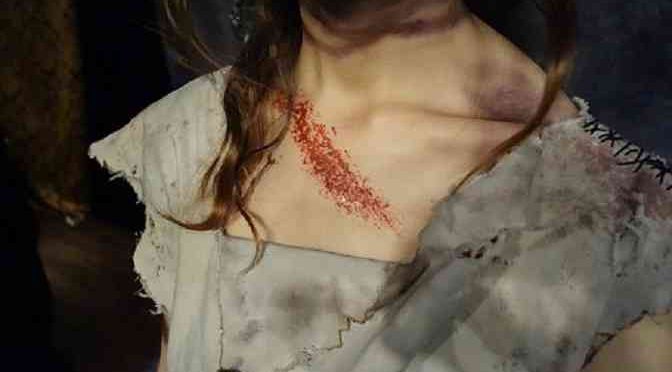 “Oh, poor thing has been scarred for life.”

“She has become a big blot on the family’s reputation.”

“That is really sad… but she should have been more careful.”

“Why were you out so late in the night?”

“She has lost everything along with her dignity.”

“How will we face the society now? We are ruined!”

“Better go home and forget about the incident, a case will only subject you to more humiliation.”

These are just some of the awful things we say, and in doing so, continue to victimize the victims of sexual abuse. They face this everywhere – in their homes, at the police station, at the hospital, at their workplaces, in their neighbourhood. Through our insensitive words and actions, we only add insult to their injury.

During the time when I was working as a volunteer with an NGO which worked to rehabilitate survivors of sexual abuse – most of whom were rescued from trafficking rackets – I was exposed extensively to our society’s mentality and attitude towards this subject. Not that I was not aware of this apathy earlier; but it still hit me hard how most of us do not really bother about this grave problem plaguing our country until we are the ones impacted by it. I remember an interaction with an acquaintance of mine, a few years ago which had left me feeling dejected and distressed. She was looking to hire someone for a full-time employment to assist her with her small home business. I recommended one of the survivors whom I was counselling as she fit the bill perfectly.  She was appalled at my suggestion. She said I was insane to even propose such an idea. I insisted that the girl in question was smart, qualified and efficient but she ended the conversation abruptly with the statement – “I do not want to hire a rape victim and complicate my life.”

Although, when I recounted this to a colleague back at the NGO she was not surprised at all. That is when it truly dawned upon me that ours is a country full of arm-chair activists who have great things to post and share on social media, but rarely do they practice what they preach. Why is associating with a sexual assault survivor a matter of prestige for us? How shallow is it, on our part, to place the honour of a woman in her vagina; which when violated once, we proclaim her life as forever ruined? Why is it so hard to understand that the perpetrator of the abuse is the one who should be shamed for the disgraceful act and not the victim? Ask yourself this, would you willingly marry a survivor of sexual abuse or offer them to work for you? I am sure the number of people answering in an affirmative will be minuscule as compared to the figure on the other side. This has to change!

Quite evidently, we need improvements in the legal system and processes to handle this problem. We need the police force and the medical professionals to be gentle and sensitive while working on sexual assault cases. We need expert counselors for the emotional healing of the victims. But beyond all this, we as a society have a huge role to play not only in eradicating this problem at source but also in rehabilitation of a sexual abuse survivor. Both of these are not independent of each other. The basic and the most crucial aspect of supporting sexual abuse survivors is our empathy. If we as a society can understand and learn to be empathetic, not sympathetic, everything else will follow. Pitying their situation will not change anything and means nothing to them. We need to be compassionate and realize that it could have been anyone else in their place. We need to stop looking at them with disdainful eyes. We need to accept, love and respect them, because they deserve it just like any other human being.

While there is a large section of people who equate being sexually assaulted to loss of honour, there are others who go the other extreme in their behaviour under the assumption that they are “helping” the sexual abuse survivor. One of my friends who is a rape survivor was really exasperated when her friends would not let her even get up to order food in self-service restaurants or let her go home alone even weeks after the incident. Their well-intended acts drove her insane because they constantly, although inadvertently, made her feel inadequate. We need to appreciate that they do not really want extra privileges or forced aid. Of course, we need to be there for them. But we also need to let them be, without being pushy and intrusive. The trick lies in using our wisdom to sense what is required to be done and when.

There is a bizarre and imprudent assumption some of us formulate in our minds about sexual abuse survivors. Not sure if it is because of the way these things are portrayed in movies, but we have a stereotypical image of how they deal with it. When I designed a dance therapy workshop as a part of the rehabilitation process of a few survivors, some people were surprised that I was thinking of making them dance. “You expect rape victims to actually dance?” was the highly thoughtless, mocking reaction from many. It’s as if people expect them to forever remain forlorn and dispirited. If we have such ridiculous presumptions, how will we ever encourage them to get back to lead a normal and happy life? Let me tell you, that the dance therapy workshop was a huge hit and was chosen amongst the top 3 “High-Impact” workshops of the year by the NGO. So there!

While victim-shaming reeks of patriarchy and hypocrisy in our society, victim-blaming is something I abhor equally. It is sickening how we do it, under the garb of “protecting our culture”. Remember the shocking episode that occurred in Bangalore on New Year’s Eve which shook the entire nation? Let me jog your memory if you don’t. As revelers gathered in the heart of the city to welcome the New Year, women were molested by a mob of unruly men right in the presence of the police. As always, amidst the outrage and furore, the moral policing brigade was quick to comment – “What happened was really sad, but why were the women roaming on the streets drunk?” These ‘but’s and ‘if’s irk me to no end because till the time we do away with them, nothing can and will change. It does not matter where a woman was or what she was wearing or what she was doing when she was abused. It shouldn’t! Because if it did matter, children and elderly women would not be getting molested and raped. We need to stop putting the onus on victims to prevent themselves from getting assaulted.  Instead we need to focus on nabbing and punishing the criminals in the harshest of ways.

It is high time we start standing up for what we know in our hearts is right. As I write about this, I am reminded of a friend of mine who was in love with a wonderful lady, who was a rape survivor. My friend’s family was against the match and their justification was not really unanticipated – “We feel sorry about what she went through but she can’t marry into our family as it will tarnish our reputation.”

My friend was dismayed but broke up with the lady. I was deeply disappointed in my friend. “Why could you not take a strong stand when you know you are right and your parents are wrong?” I confronted him multiple times. But I never received a satisfactory response. I guess we avoid confrontation because we are too scared of losing out on our relationships and disturbing their peace and harmony. But, if we truly want a change in our society, can we afford to shy away from these discussions, arguments and confrontations? Maybe, I was afraid too at one point, but am glad I realized that deep-rooted ideologies cannot undergo a transformation unless we fearlessly stand for the beliefs which will drive the revolution we wish to bring. Sure, I have lost a few relationships in the process but I have no regrets.

Rehabilitation of sexual abuse survivors involves a layered approach and is a complex and intricate process; even more so in a society like ours. There are various threads – speedy justice, physiological and psychological treatment, skill development in certain cases to assist them in becoming financially independent, empathy and whole-hearted support and acceptance of the society- that need to be woven together to resurrect the life of those who have been tormented due to this ghastly crime. So, go ahead. I urge you! Do your bit, initiate open dialogues, spread awareness and most importantly stop propagating the culture of “Don’t get raped” in your girls.

Instead say it loud and clear to your boys, “Don’t Rape”!

// This article was first published on the prestigious platform “Incredible Women of India” and is available at the following link.